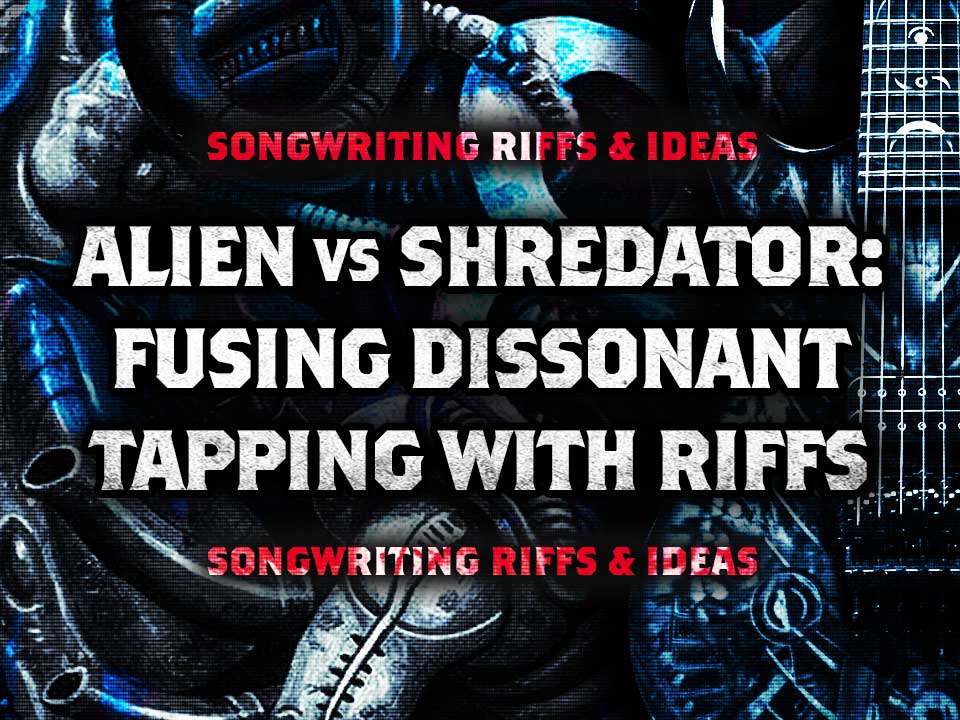 In this lesson we’ll combine some tapping with a riff to create an unusual “alien” kind of sound. I’ll keep the riffs quite simple so that you can focus more on the tapping side. However once you get the hang of things you can start to combine these ideas with more complex riffs.

We’ll also look at doubling up on the tapping parts with a minor 2nd harmonised part. This will give it a dissonant and more alien sound.

These ideas are intended to sound heavy and/or unnerving so we’ll be going out of key. However we’ll keep a loose idea of being in F# minor so we have a “home” note to resolve to.

In this first exercise we’re keeping things super simple. The “Riff” is simply a single note played on the open F# string. If you have a 6 or 7 string guitar you can use the Low E string instead and move all the tapping down two frets towards the nut.

The tapping part here is in the key of F# minor. We’re basically descending the scale starting with a tapped note. The notes in our key are:

This is intended to help you get used to moving between the lowest and highest strings. To end we just play part way up and back down the scale on the lowest string. Feel free to experiment with other notes from the scale for this end part.

Note that Guitar 2 is playing the higher parts a semitone higher. The notes on the lower string are the same as Guitar 1. You can record a second guitar for this part or use a harmonizer pedal to acheive a similar effect.

Now its time to introduce some dissonance! We’re going to repeat what we did in exercise 1. Now instead of repeating the tapped part 3 times we are going to add in a diminished arpeggio.

The diminished part will start with a “hammer on from no-where” using your index fingerfor each new string. On the G and B strings we are playing A# diminished and then returning to notes that are in key (F#m) on the high E string. The notes at the top can be tapped with your middle and ring fingers on your picking hand. Alternatively you can tap with your middle finger and slide up and back down. (For guitar 1 this will be 21-22-21).

As before a second guitar will play the notes on the higher string all a semitone higher. This gives us a dissonant sound between the two guitars.

For our third exercise we are going to introduce a bit more of a Rhythm. Again we’ll keep it super simple for now, just palm muted open notes on the lowest strring. The tempo for this exercise will be slower giving it a half time/breakdown kind of feel. However we are playing 1/32 notes for the tapping parts so these will feel very fast. You’re squeezing 8 notes into a single beat!

As before a second guitar will match everything except the lowest string with notes a semitone higher than guitar 1.

Other things to try

Once you get the hang of this you can start to put in more complex ideas to the rhythm. Also try to experiment with using different sequences of notes and/or arpeggios for the tapping parts. You could even add some alternate picking or sweeping and have a second guitar match those a semitone higher.

Also feel free to experiment with harmonising different intervals. For example instead of guitar 2 playing a semitone (1 fret) higher have them play a Major 3rd above or below. Try this with various intervals such as a diminished 5th etc.

If you are a Patreon member at our “Grand Upper” level or above you can download the Guitar Pro tab here. 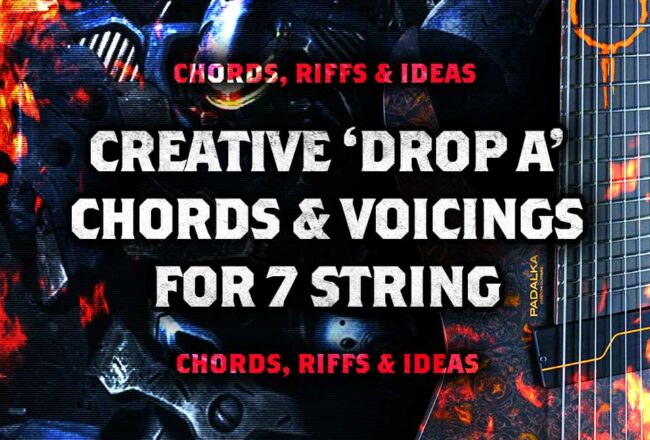 7 String Chords in Drop A Tuning 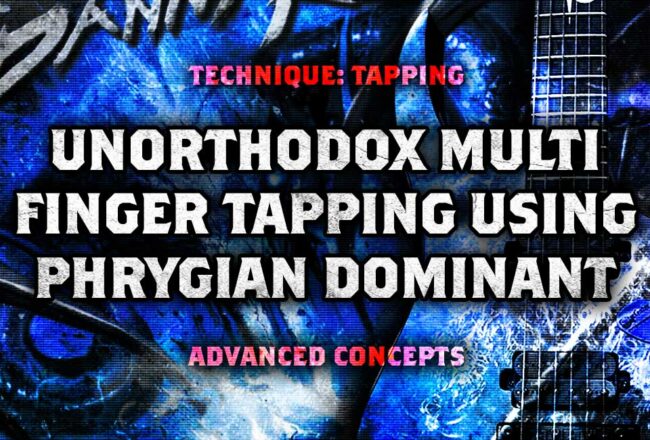 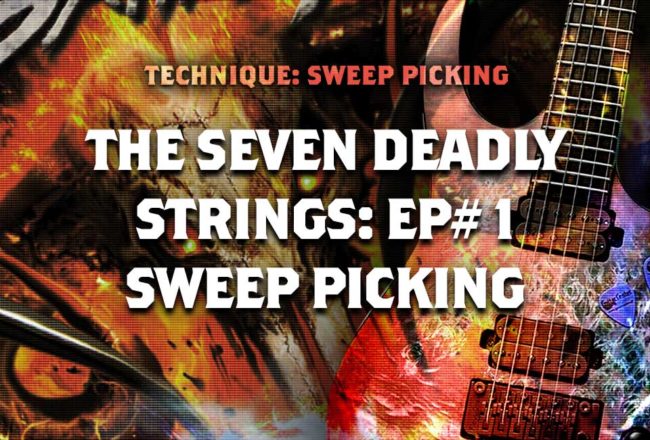 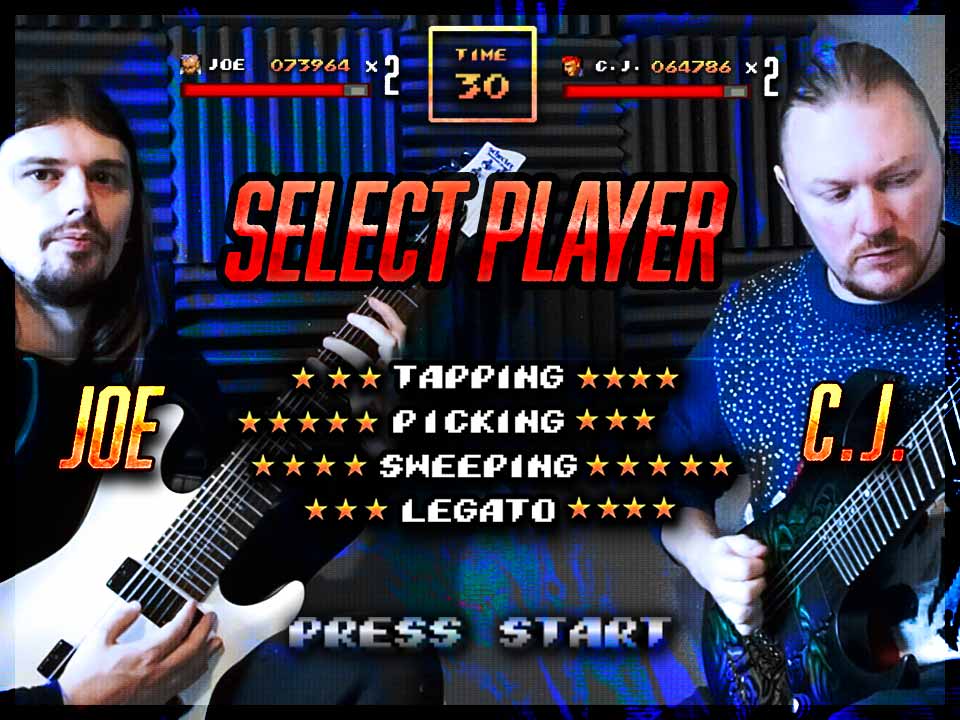 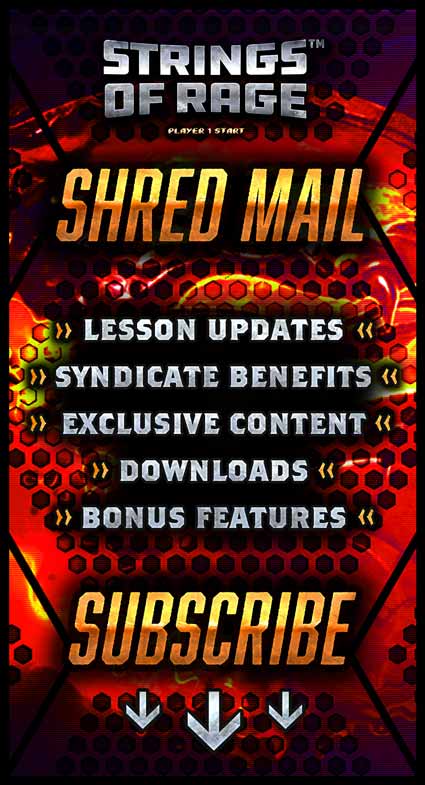 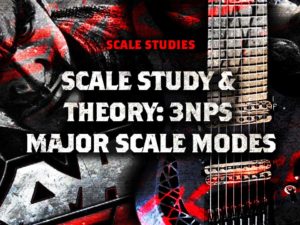